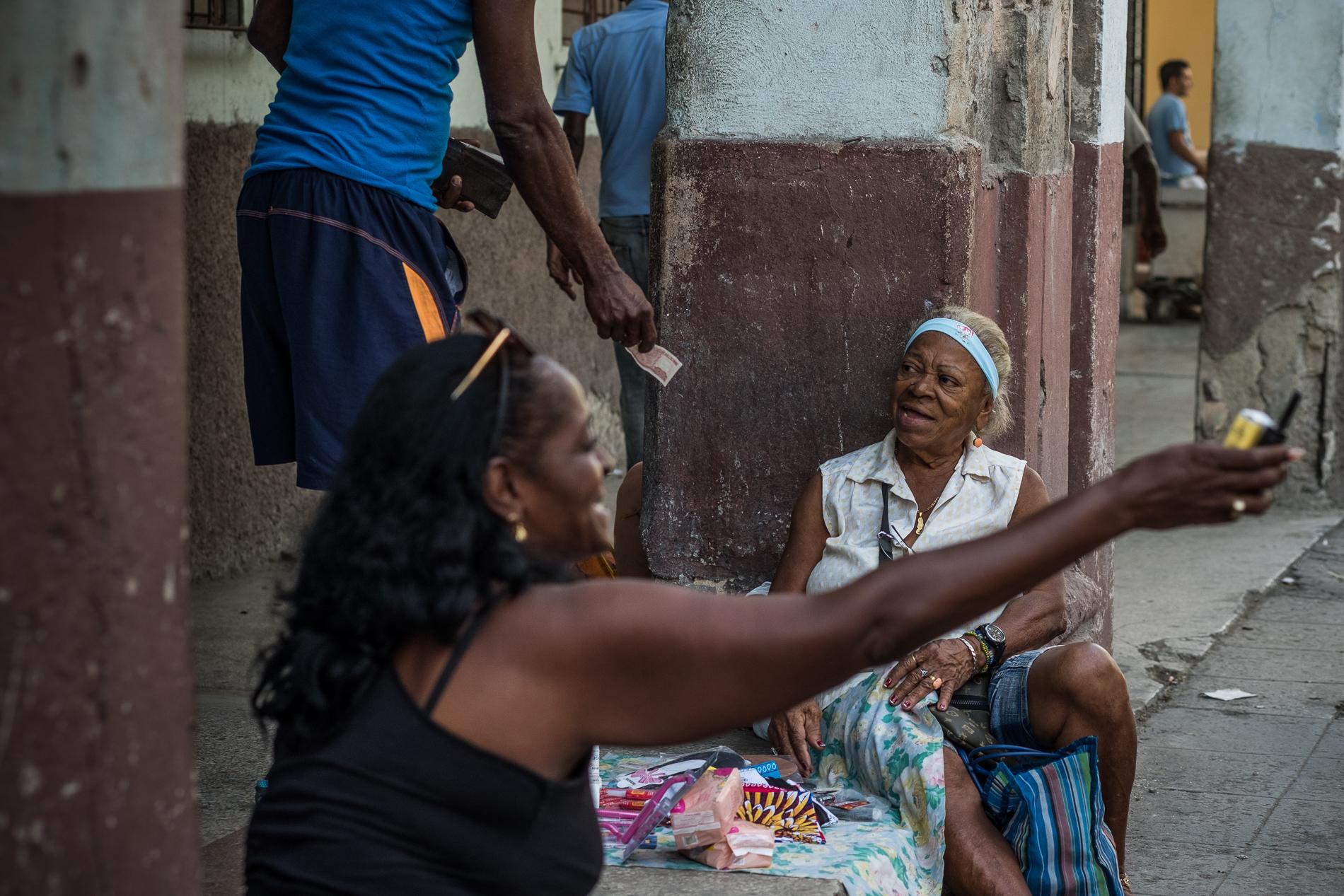 Ampara Campos is 82 years old. She has worked, among other jobs, as a nurse and in a bakery. Her pension is 280 pesos Cubano (less than 10 euros per month). She sells random items such as glue and socks on the Havana streets. She lives with the earnings day by day, without having insight into her monthly income: "It makes no sense: what I earn, I immediately spend on food." 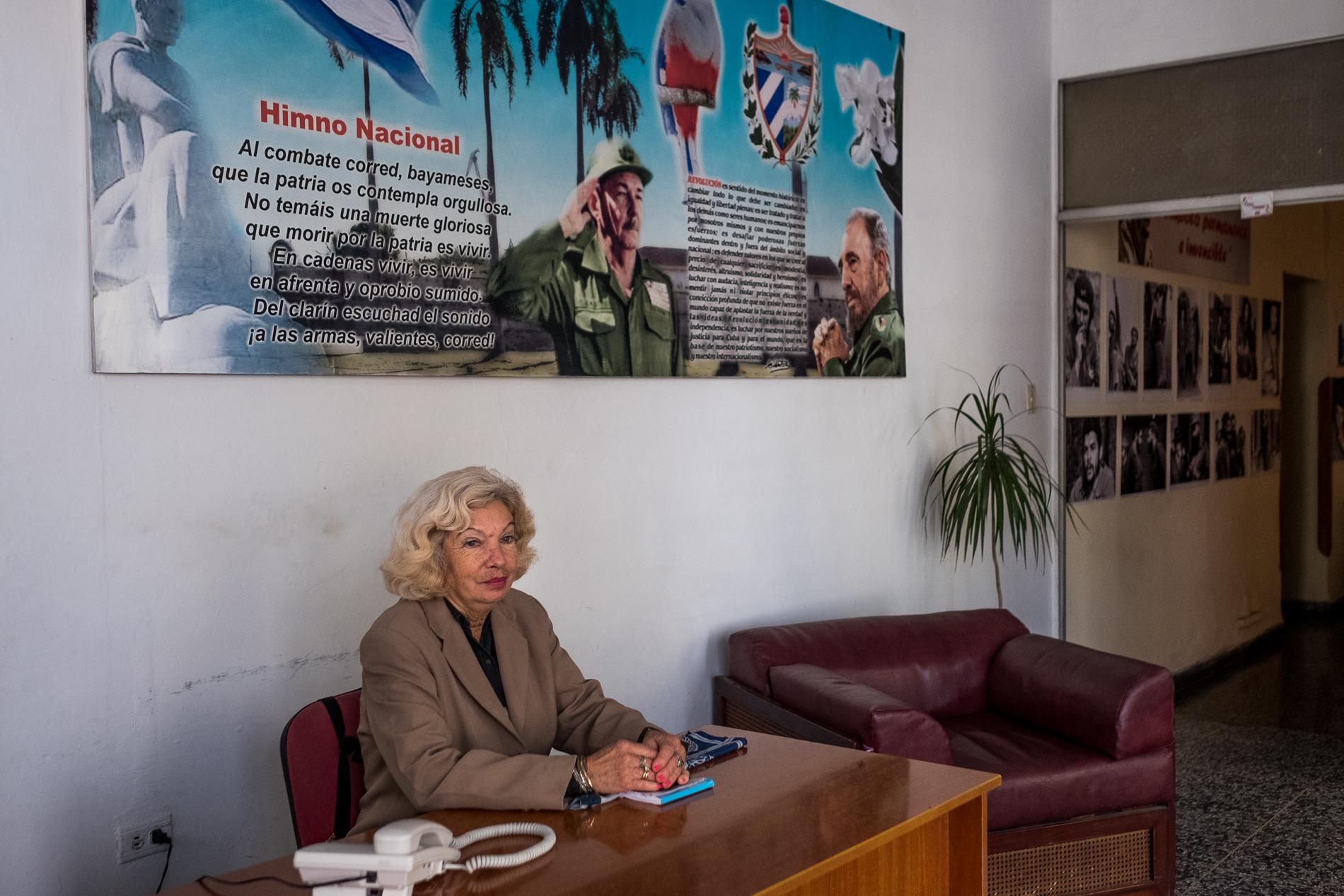 At the age of fifty, Daisy -who does not want to say her last name- got early retirement because she became ill. For years she worked as an English teacher. Now in her sixties, and after having reached the retirement age for women, she works as a secretary in the Communist Party office in the city of Matanzas. "I love my job because I've always been a Revolutionary." She prefers to keep her income secret: "As a member of the Party, I can't tell you too much." 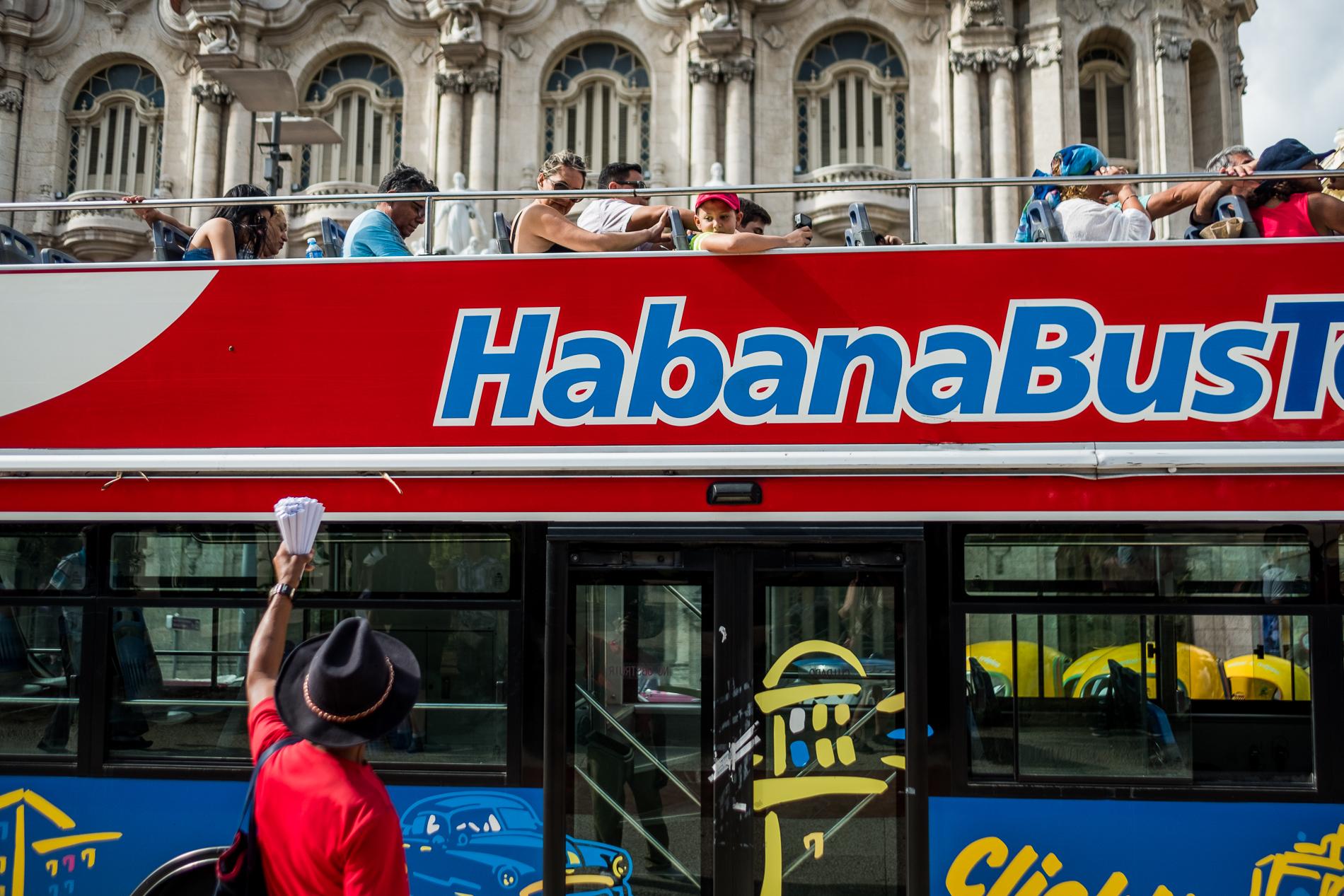 Ony Mendoza - now 70 years old - has been retired for five years and works as a peanut seller in central Havana. Every day he takes the bus from the suburbs where he lives with 250 carefully measured peanut portions. Cubans buy these for 1 peso Cubano per tube (4 cents), but he mainly tries to sell them to tourists in CUC (equivalent to the dollar). "Then I give, for example, three tubes for 1 CUC (= 1 dollar). The extra money is needed to supplement my pension of around 300 peso Cubano (10.25 euros). 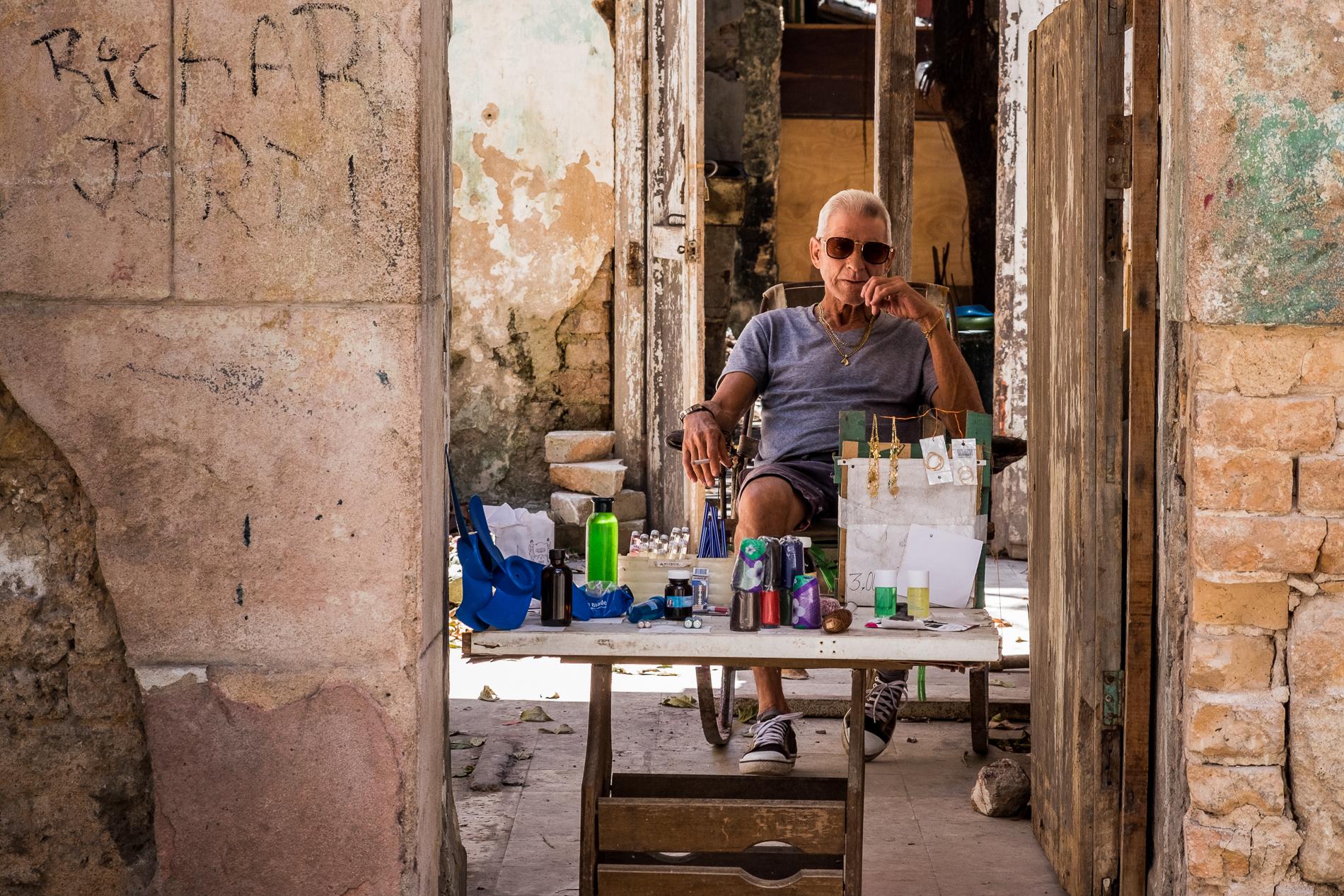 Raul Bouza sits in his house in Havana Vieja that collapsed in a hurricane three years ago. From here he sells all kinds of products he manages to buy, such as lamps, perfume and batteries. His pension is 240 pesos Cubano (ten dollars). Every month he has to pay a license of 500 pesos to sell his trinkets. Bottom line, his marginal trade yields just a little more than his meager pension. Together with the $ 100 his brother sends him from Miami every three months, he can keep himself alive. There is no money to repair his house. 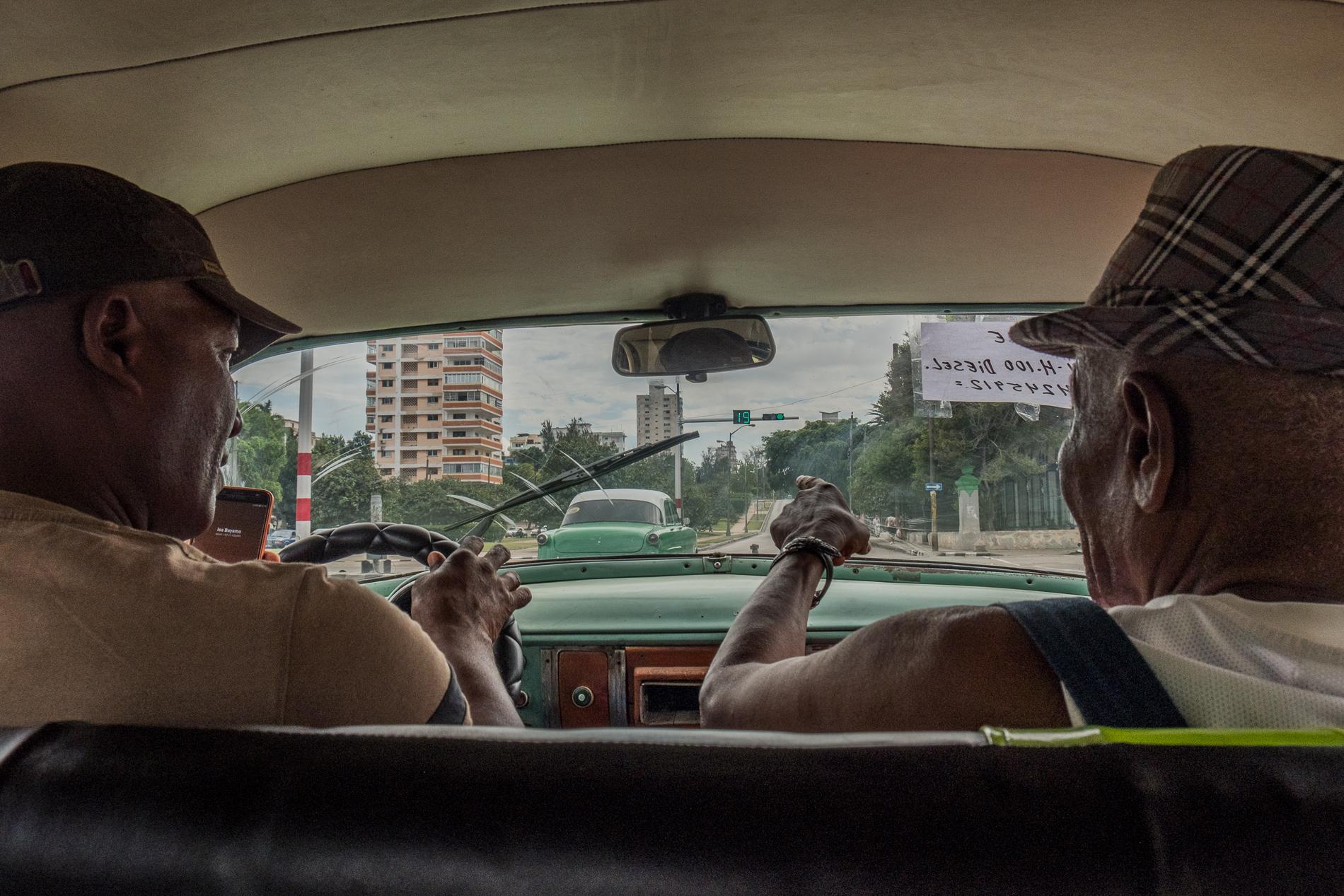 Mario Díaz (right), now 81, is trying to increase his retirement as a "real estate agent" in Havana's informal housing market. With a customer (left) he drives in his car to one of the houses he offers in the affluent district of Vedado. "I would rather sell an expensive house now and then, for which I get commission, than a lot of houses for very little money.'' In 2018, he sold only one house in the whole year, which brought him a total of 1,000 CUC (dollars) . "So that's my pension for the entire year". 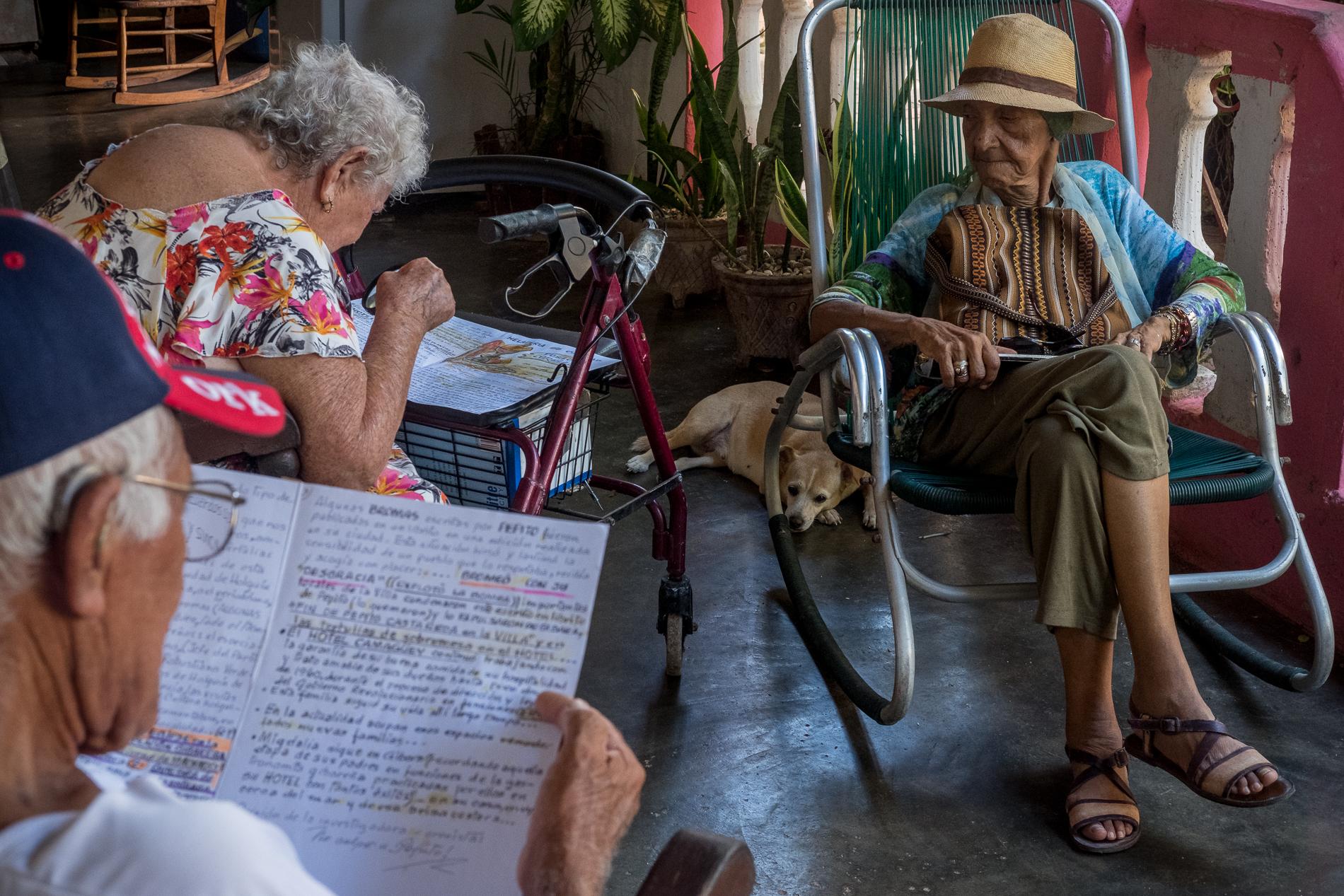 "Artists have no age. They are immortal." jokes Maria Lozada de los Angeles, who is trying to plus her 300 peso Cubano pension by selling texts, drawings, sculptures and paintings. She lives in the seaside village of Gibara, where she leads a rich social life. She uses her retired friends to provide feedback in a handwritten text with drawings, that she wants to sell to the municipality. 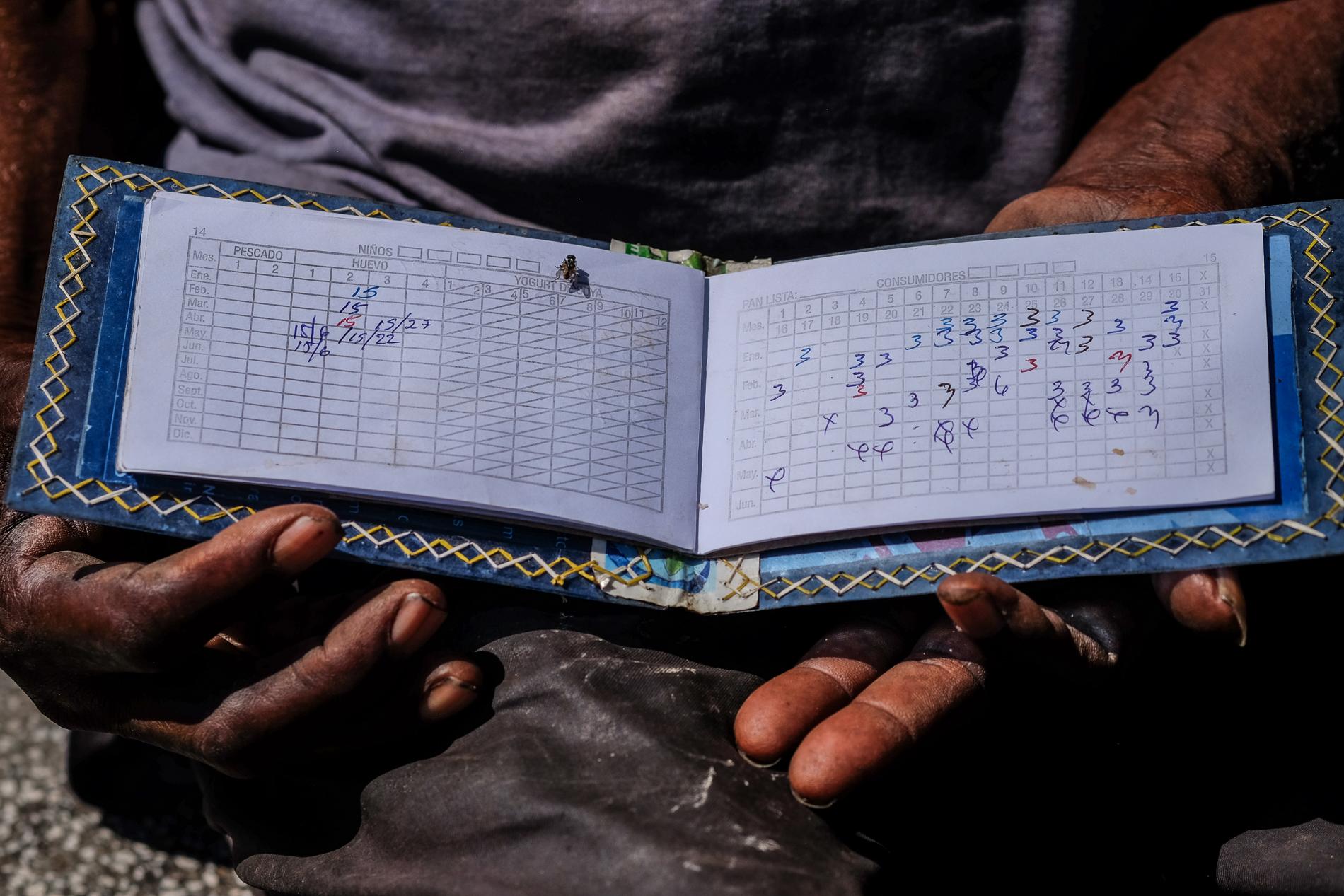 In the poor San Lazaro district of Cienfuegos, 89 year old Angel Julio Soza Castillo sits in front of the dilapidated house where he lived all his life. After 40 years of working as a construction worker, he has to get by on 200 pesos pension (less than 8 euros). The libreta is indispensable for him because it allows him to obtain basic foods at extremely subsidized prices, according to the communist system of rationed food distribution. When asked if he is lacking in anything, he replies: "Only a television to watch the beautiful girls." 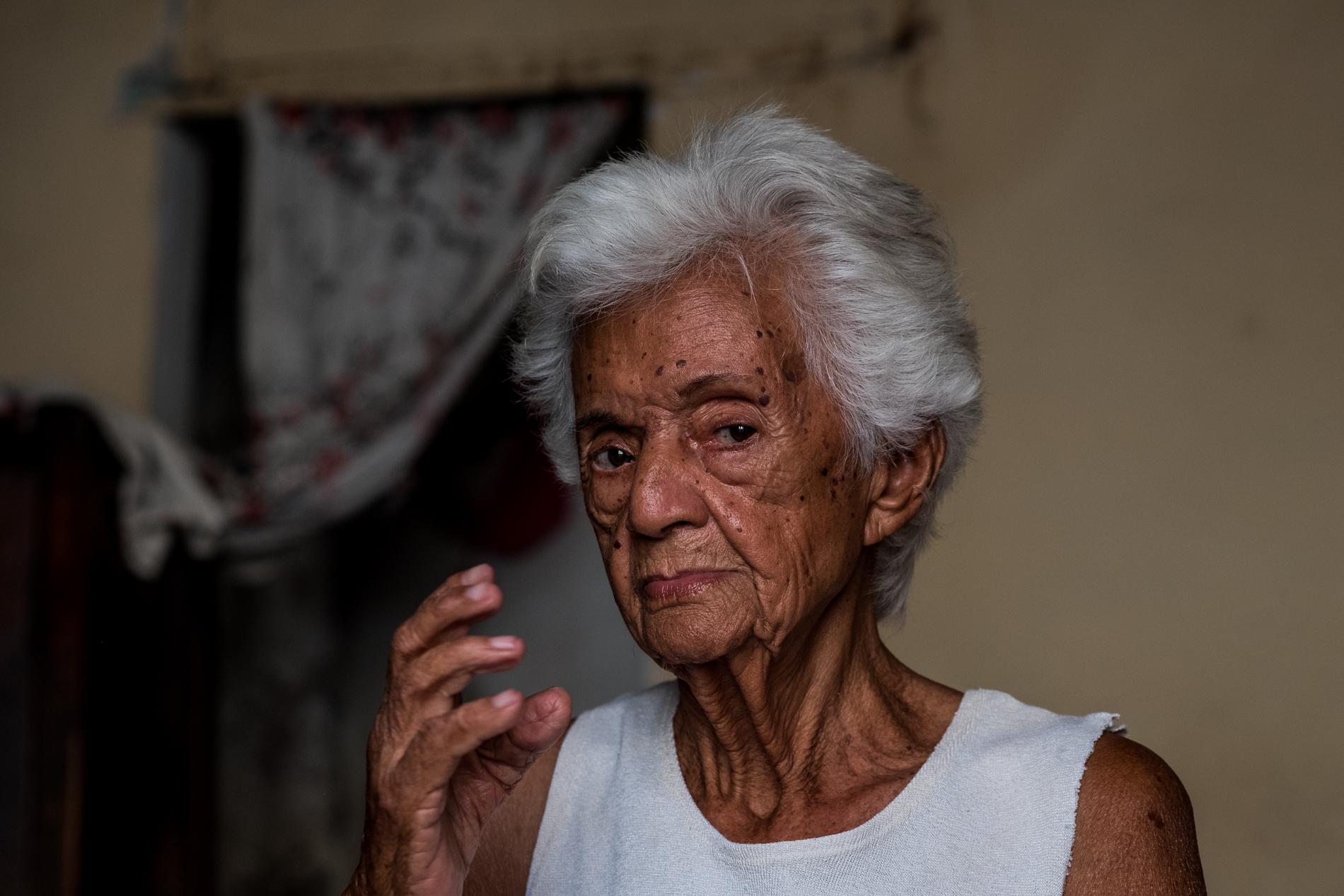 Aida Guerreros Blanco is 92 and has to live on 120 pesos ($ 5 a month). She lives in the center of Bayamo, has no husband or children, and is cared for by her niece. From the rocking chair in the doorway, she approaches sporadic tourists and passers-by, hoping they will donate something after a chat. 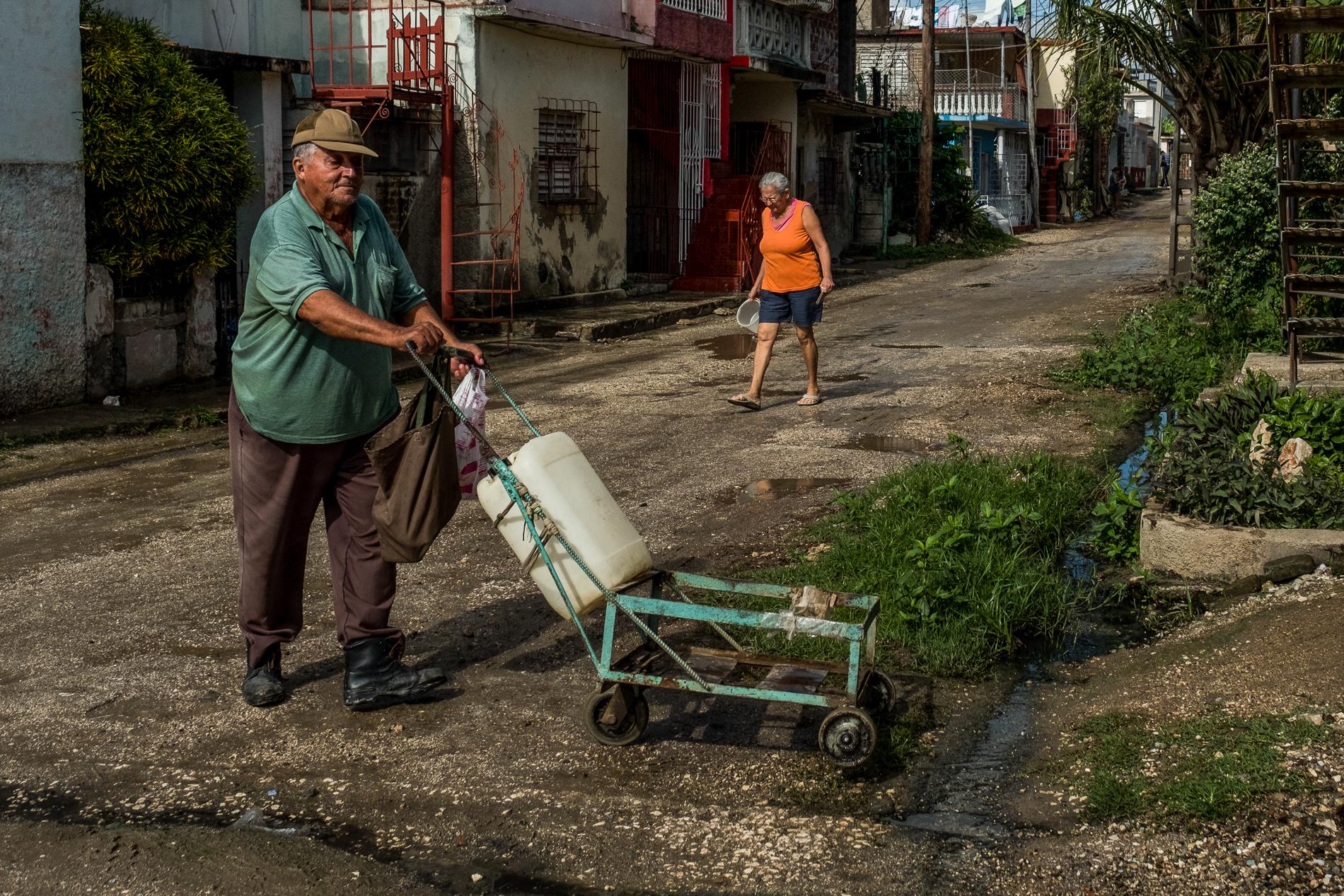 At 78 years old, Gilberto Velasques Ramos works as a water salesman in Holguín. Because the water comes brown from the rusted pipes, water points have been established in the city where people can buy clean drinking water from water sources outside the city. Gilberto buys the drinking water from these points and brings it around his neighborhood with his car for a small fee. 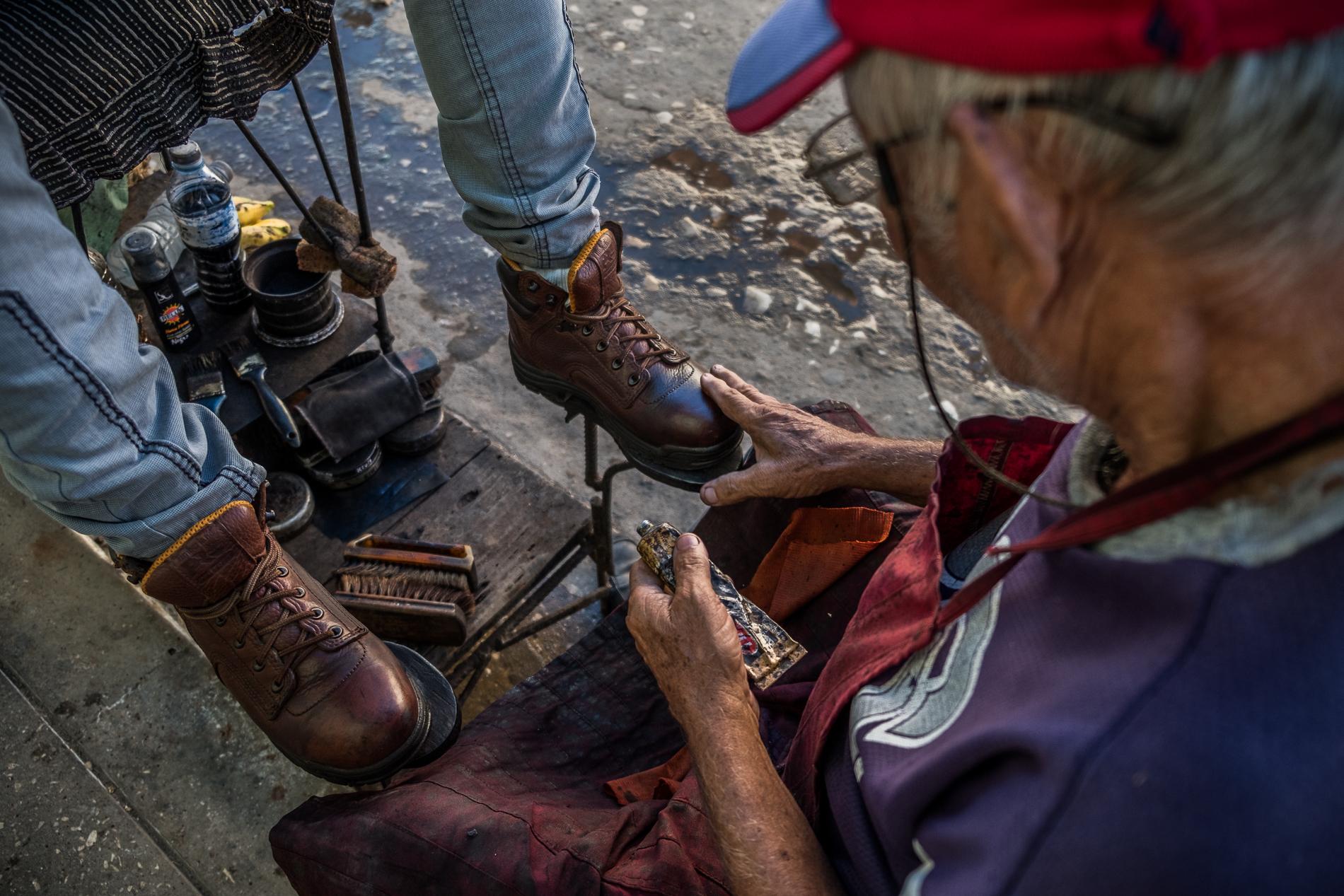 "I'll keep working until I die," said Milo Suarez Turquisa, who, at 73, works as a shoe shiner in the city of Trinidad. For each pair of shoes cleaned, he receives 5 peso Cubano (20 cents). He worked for 42 years in an electricity products factory, building a pension of 300 pesos ($ 12.5 per month). 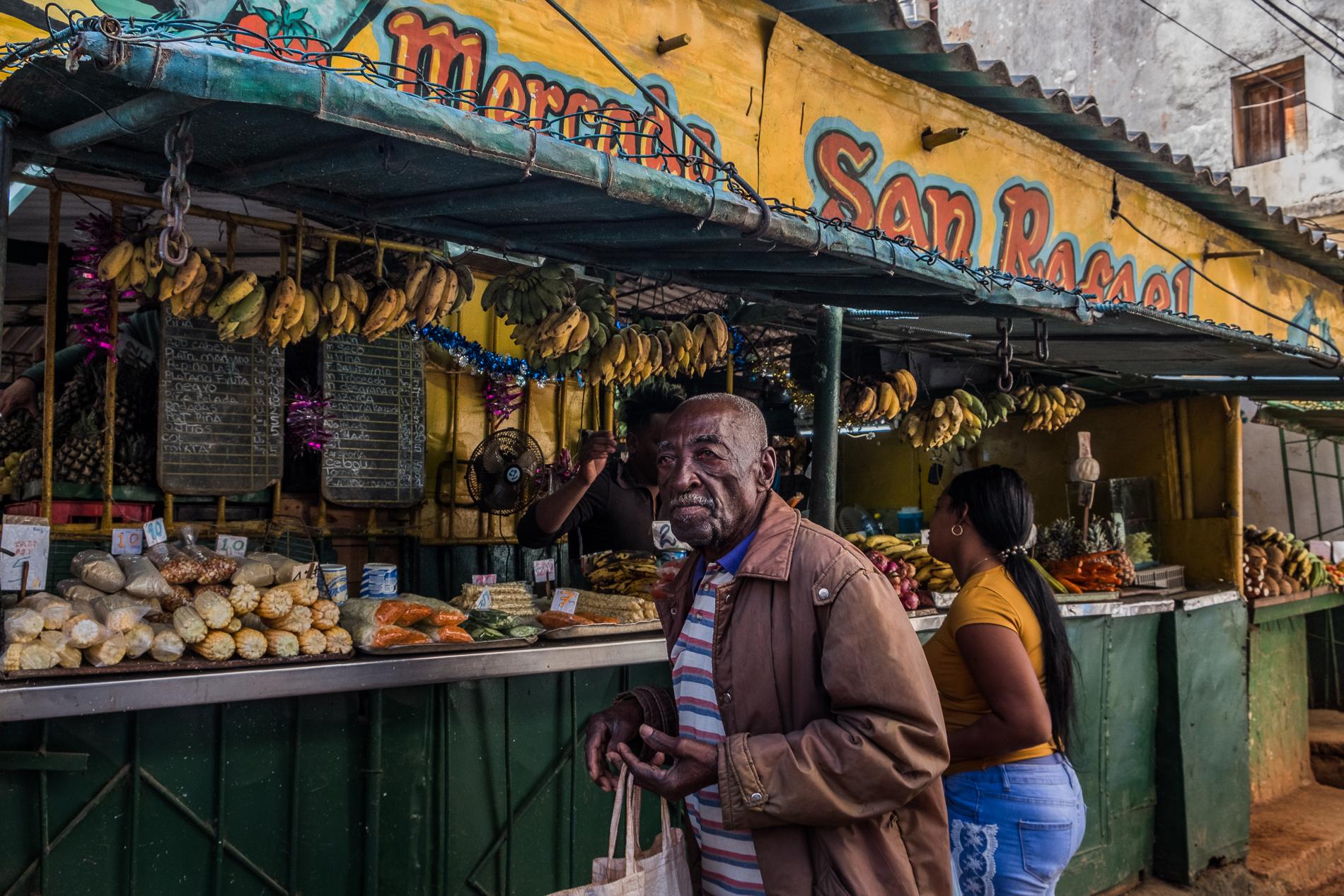 Ebaristo Día Día, 87, has worked for 25 years as a handyman in the print shop "Yo soy Fidel" - "I am Fidel". He gets breakfast and a hot lunch and receives 300 peso Cubano per month to supplement his pension of 300 peso Cubano. One of his tasks is to do the daily shopping for the lunch that is offered to the employees. 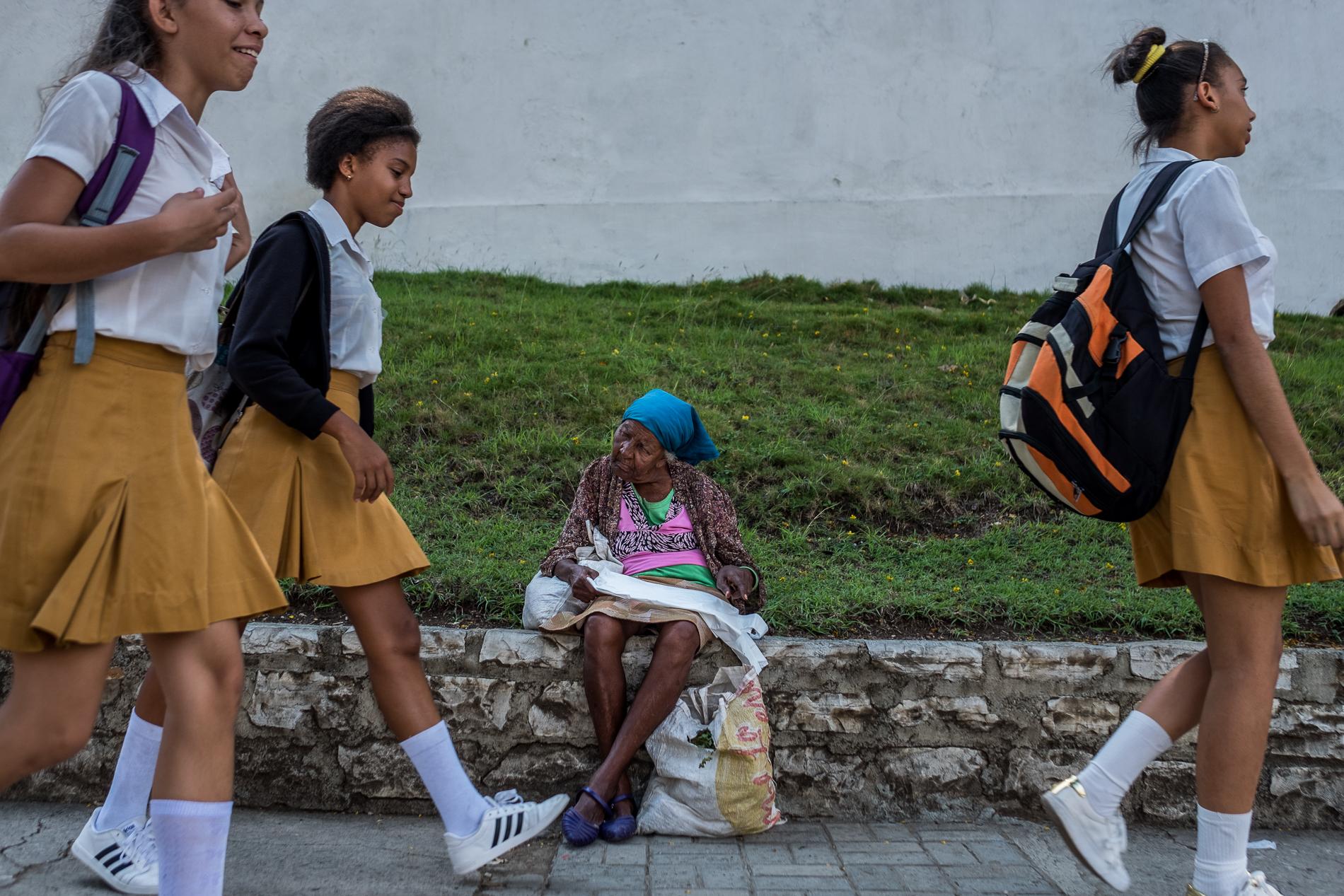 On a busy street in Santiago de Cuba, 86-year-old-visually impaired Lidia Herredia Grinom sells plastic bags and matches to passers-by. The 300 peso Cubano widowers' pension she has been receiving since her husband, who was a butcher, died 15 years ago is insufficient to make ends meet. She has a number of regular "customers" who hand her a peso without taking the products.
TEN DOLLAR PENSION
The mean life expectancy in Cuba of 78.89 is remarkable. This is almost equal to the life expectancy of 78.93 in the US (Source: United Nations, 2020). According to Cuba's pension system, the retirement age is 60 years for women and 65 years for men. Because salaries are extremely low, the pension is often less than the equivalent of $10 (240 pesos Cubano) per month after more than 30 years of employment. The dual economy on the tropical island requires Cubans to be inventive to survive. In order to buy the products that cannot be bought in peso Cubano and that are not included in the "libreta", the subsidized communist food booklet, Cuban elderly must find an additional income. Preferably in the peso convertible (CUC), which is equivalent to the dollar and is worth 24x more than the peso Cubano; and with which many products have to be paid for. In several cities in Cuba I photographed retired elderly people working in the informal economy.